Shannon over at Rocks in my Dryer requested that we share the toys that have worked well at our house. You know the toys that actually get played with over and over, not just a few times a year. I have noticed this trend as well and I thought this was a fun topic. 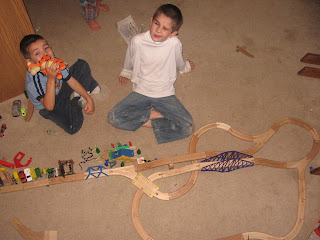 This is a good list, many of our favorites, too!

Our list would be about the same. No train set at our house. And I would add that I really like the Kitchen that dad made for me when I was little. The kids use it quite often. Also they play barbie type dolls a lot too.

My kids also love legos, even though my daughter is now a teenager!

Benjamin, has the most fun with tape and paper, and cardboard, he is always trying to design some kind of contraption that will enable him to fly.
When we first moved to the Ukraine we bought a refrigerator. (refrigerator boxes are the best!) We used the box and made Benjamin a card board house, that we can fold up and pull it out and reassemble when the kids want to play with it. That was 4 years ago! It has been duck taped, and stapled back together so many times. Then it gets broken and becomes a whole new toy! something for the kids to prop up on the couch and slide down, etc. We have tried many times, to throw it away, but the kids are to attatched.

Great list - thanks for putting it together. Naturally we like the dolls; my 10 year old is smitten right now with American Girl Doll; she can't get enough!