What really works for me this morning is being in my warm cozy house since it is -24 degrees outside. :-) But beyond that....

At one of my bridal showers (over 10 years ago) I received this cookbook. It is actually a photo album but each lady that came to the shower provided a recipe to go in it and then as I collected recipes I could put them in their as well. The friend that put it together put tabs on to divide it into categories. 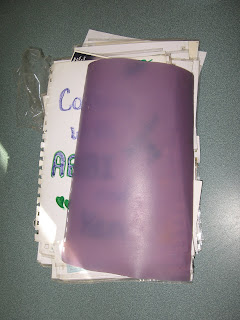 This cookbook has definitely been the most used one that I have.(As you can probably tell from the picture!!) When I was newly married I remember getting from mom her cornbread, biscuit, doughnut and various other recipes.When living by my Grandma I added quite a few recipes from her. I also got quite a few recipes from my friend Tina who is a great cook as well as many other friends. In later years I have started adding ones that I found on the Internet and we tried and liked. But lately this cookbook has been less useful since it was falling apart. It was time to do something about it. 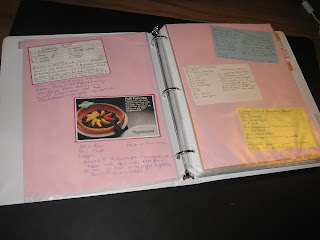 I got one of the many 3 ring binders we have around our house, bought some page protectors to go in it and then decided to use some colored paper that we had a bunch of (it was given to us in 3 colors: pink, orange and green and it was 15 inches long but I just cut it to fit.) and then I just started securing the recipes to the page. Originally I had thought that I would type all the recipes out put decided it would be easier and also more interesting to put in the recipes the way I had them as many of them are written by the person they came from and they all bring back memories. I divided them into categories the way that I liked best and had a certain color of paper for the categories (rotating the colors throughout the book), I also made a title page and tab for each category. 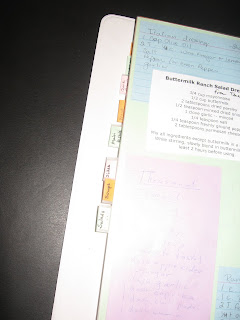 I am really looking forward to putting my new book to work. Some of the other benefits of this book include washable pages and a cover that has pockets on the inside so I can stick recipes that I want to put in the book in the pocket until I get around to putting them in. For recipes that I think look neat but haven't tried I stick in my recipe card box to wait until I have time to try them and see if they are actually good or not. A personal cookbook really works for me!! 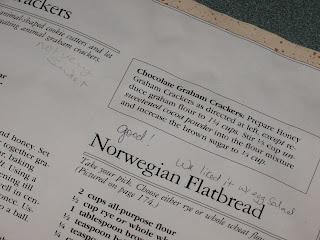 Another way I have personal cookbooks is with my regular ones I make notes a lot of the time. If I try a new recipe I try to write what we thought of it and what adjustments I made. This really helps when I go back to use it again.
What do you do with all your recipes? What methods or tips do you have?
Posted by Abbi at 8:17 AM

This is a great idea! I have recipes that I've collected over the years; some hand-written, some cut from mags, and such) I have them all now stuffed inside a recipe box, which is conveinent, byt hardly efficient! I do like this idea, and I prob'ly HAVE a binder around here, somewhere...

Have a great week, and thanks for the tip!

My cousin made me a recipe notebook just like this. She asked family members to donate recipes to get me started. Over the past 15 years (time flies) I have added a gazillion more plastic pages and filled them with recipes from magazine clips and friends. About once a year I go through and clean out recipes that I don't use anymore or never tried. Have a great day!

that's a great idea! Thanks for sharing!

GREAT Idea! How nice it would be to have a cookbook from the people your closest to. :D Thanks for the ideas!

You are all very welcome! Thanks to you all for stopping to visit!