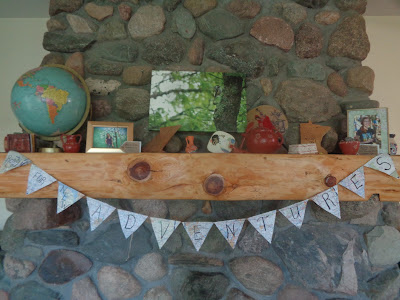 We have never really hosted big parties that center around one child (such as a birthday party - we do have family over for birthdays but not your traditional party) so it was different and pretty fun to be hosting a party in Mara's honor.

Mara really enjoys traveling and going on adventures so that became our theme for the open house. It seeemed especially appropriate since she plans to go to Adventures In Missions this fall. 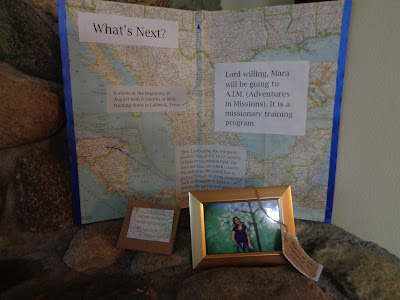 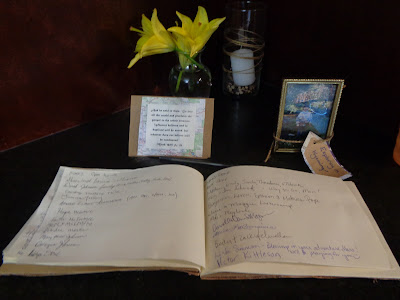 We had people sign in at our guest book. For decorations we had used maps various places, verses (mounted on maps) that talked about going places/the world etc. , I had a bunch of small pictures of Mara framed that highlighted different travels/adventures she had enjoyed throughout the years. I had those all labeled. We had flowers in little jars scattered around as well. 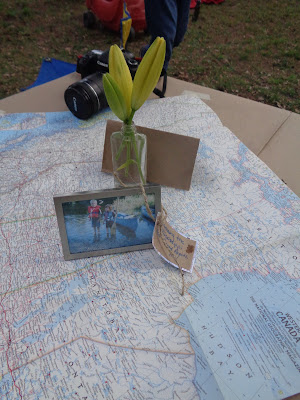 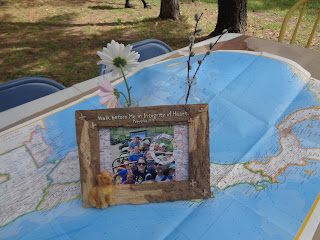 On the tables we put down brown paper then maps and then the picture, verse and flowers. 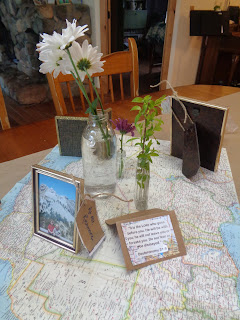 We had tables set up both inside and out. We were blessed with a super lovely day so most of the people sat outside but there were many inside as well. 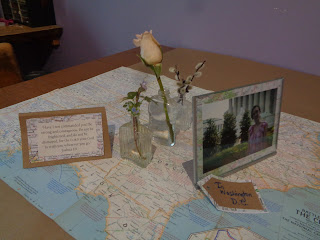 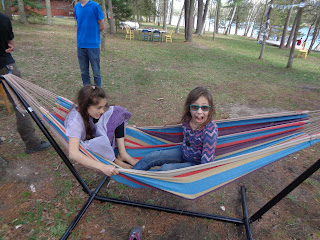 My sister Keren brought over their hammock which was enjoyed. 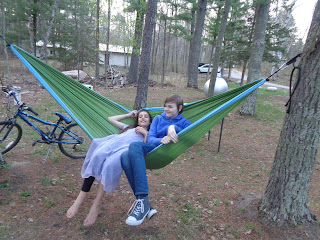 The boys then put up theirs as well (we hadn't thought of it earlier) and all of them were used a lot of the time. 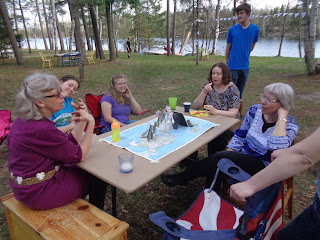 A lot of eating and visiting went on. We were really blessed by all that came to celebrate with us. 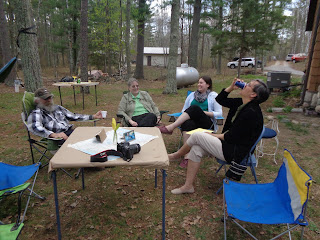 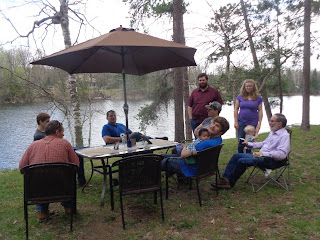 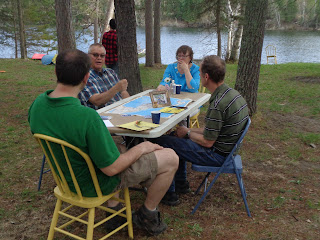 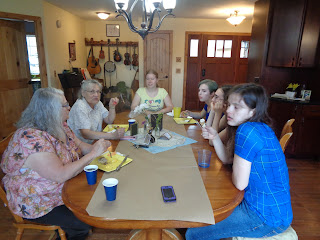 and many long time friends. We are truly blessed by the friends that we have. I had hoped to get pictures of everybody but that didn't really begin to happen. 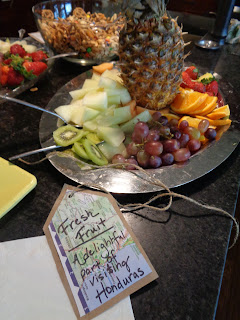 For food we continued with our travel/adventure them. Mara thought of foods that she has enjoyed from travels that she has been on and we then figured out what would work to serve a crowd, adjusted some ideas, tried out some new recipes and came up with a pretty yummy menu if I do say so myself.

One of her favorite things about Honduras was all the fresh fruit. So we have a large fruit tray in honor of that trip. 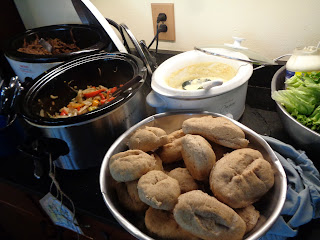 When she went to Washington DC she enjoyed Philly Cheesesteaks so we decided to have those. This was what felt like the trickiest thing to have enough to feed a crowd and to keep it warm for the 4 hours of the party. I used a combination of roasts and steaks and with tons of help from my brother-in-law got it all sliced up into little slivers. Then I fried it up with seasonings and put it in a roaster pan to stay warm. It was delicious! We also sauteed sweet peppers, onions and mushrooms together and they went in another crockpot. Then we made a cheese sauce that went in a third. We also had homemade hoagie buns. I found this recipe to use and it worked very well (even with my using 1/2 wholewheat flour). 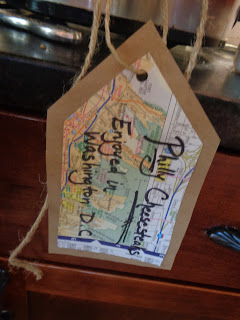 I also made refried beans something she had learned to enjoy in Mexico.
We also had the fixings for Ham sandwiches something that Mara enjoys and that we have fairly often on road trips or picnics. 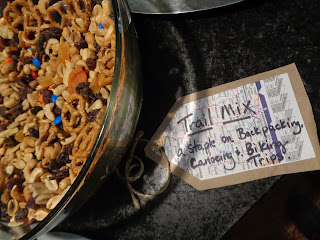 Trail mix is something we have quite often on backpacking, biking and canoe trips. It worked well for the party too.

We had Banana pops (another fun memory from Honduras) for dessert. That was a super nice dessert to make ahead of time and it was truly enjoyed by many. I made them basically like this link. Since the open house we enjoyed finishing off the leftover banana pops and have even made more. I am about to make another batch. It is a nice easy cool treat that is healthier than many.

To drink we served Horchata (enjoyed in Mexico) and iced Mint tea (a favorite from our foraging adventures around here).

We also had the fixings for s'mores, a common camping treat. It was really windy earlier in the day and because of the fire danger we didn't start the campfire until the party was officially over but we still have a nice group to enjoy the s'mores.

We had plenty of food but not a huge amount of leftovers and we have been able to enjoy the leftovers. So nothing really went to waste. Yea! 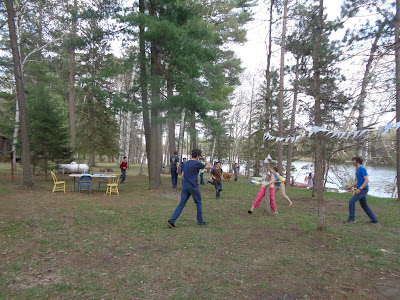 Tree base (a favorite game with kids around here) was played. 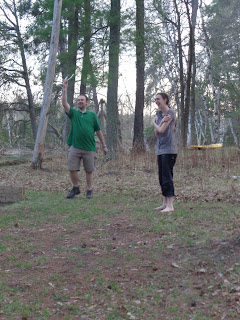 Some also went kayaking, played Frisbee, looked at bunnies, played with the kitty, played music and sang and a lot of visiting went on. I believe a good time was had by all. 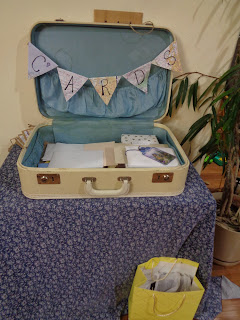 Mara was super blessed with all the gifts she received. I had fun using a suitcase for a place to put the cards. 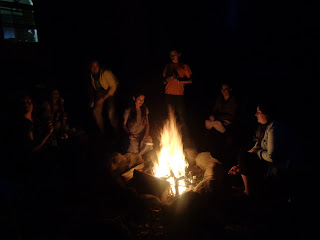 The party was officially over at 7 pm but we had people here until after 10:30 (and then of course our overnight guests stayed even longer :-) ). That was super fun! Visiting and eating s'mores around the campfire was a great way to end the day.