I wonder if maybe I have forgotten how to blog. I guess we shall see. Between busy days and a slow computer I just haven't done much blogging for a while. But I have a different and faster computer (following the old one completely crashing which was a little nerve wracking as all of my business stuff was one it) now so hopefully I can blog a little more again.

I thought I would share some pictures of some of our new additions to this homestead.... 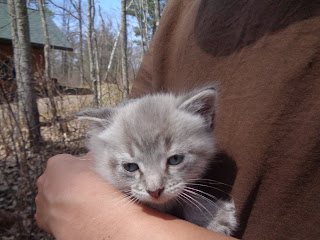 I had mentioned earlier that we lost our Mr. Sippi cat to an eagle this winter so we have been keeping our eye out for a new cat. Neighbors of some friends of ours had kittens that needed homes and so we ended up getting this little male cat. There was much debate over the name as Jonathan and I thought we hadn't gotten enough use out of the lovely name "Mr. Sippi" but others thought that we shouldn't name another cat that right away. It wouldn't be properly remembering the dead so that name was out. Our new cat is Mr. Nary. Named after the community that he came from. 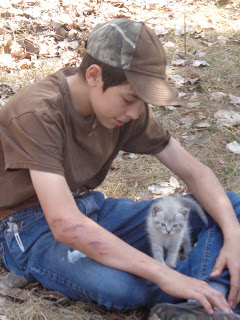 He is a pretty lively cat. And we have to keep our eye on him when it comes to our chicks. He thinks they are good wrestling partners. 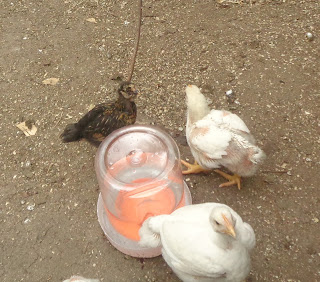 We did get 50+ chicks again this year. They are pretty big now though and the broilers are nearly ready for butchering so our numbers will go down. We got over 30 broilers and we have over 20 layers now again. 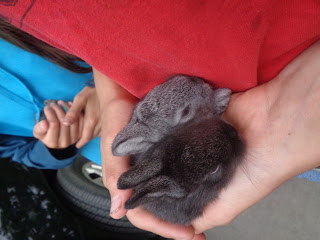 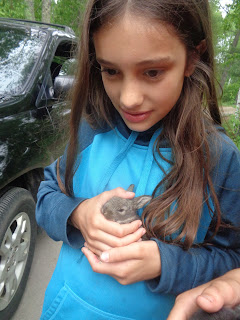 Baby bunnies we the exciting surprise this Spring. One female had 6 bunnies then a month later she had 3 more and the other female had 2. The first 6 did well. The Mama of the 6 didn't take kindly to having more so soon however and she let the next 3 die. Concerning the 2 that the other female had, only one survived. He has been a very interesting bunny however. He was born to Naomi so Mara named him "Obed".  He (possibly a she - we don't know) has been dubbed Obed the Adventurer because of the many jaunts he has taken. He has had the amazing ability of wiggling about and finding cracks that he can get through since he has been very young. We have found him in his Dad's cage next "door", in the chicken run which is below and then 2 times Kitchi (our dog) found him out of his cage and carried him down to the house. He squeaked then and we rescued him and took him back to his mom. We are amazed that he survived and has actually even thrived. 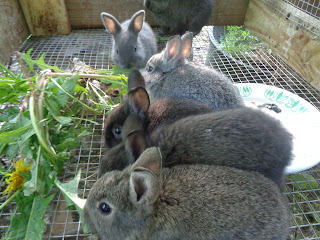 They love to be fed greens stuff to eat.

I do also have bees again this year. I am looking forward to lots of honey, Lord Willing, this fall. 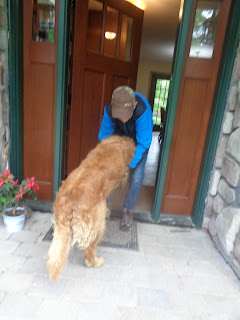 Kitchi gave us a little scare this Spring by getting Lymes disease and getting quite sick. He didn't want to walk anywhere and limped majorly when he did move around. Thank-fully we are familiar with Lymes and figured that was the problem and the vet quickly agreed and prescribed an antibiotic for him and he improved quickly after that. In the picture above Aaron was helping him get back to his place on the hearth after he had gone out to relieve himself.

The animals take work but they are also fun. With the boys gone to camp these last two weeks (they got home yesterday which is SO nice!) I have done most of the chores- it is actually kind of fun. They provide us with enjoyment, eggs, meat, honey, guarding the property and keeping mice away. We are also hoping to get fur in the future. I am thankful for our animals and that God provided them for us to have and use.

Do you have any animals?
Posted by Abbi at 11:45 PM No comments: Links to this post