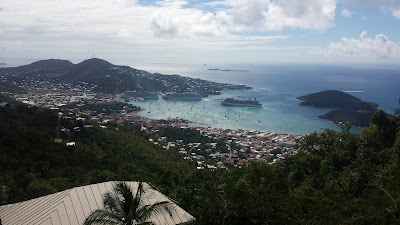 So, Ken and I just got back from a week long trip to St. Thomas in the Virgin Islands. It was a very fun time and we made a lot of memories. The picture above was one I took from the deck of the AirBnB that we were staying at. It was fun to be able to look down and the harbor each day and check out what was going on. This picture was taken on our last day and there ended up being 6 cruise ships in port that day which made the area quite busy! But we were getting pretty adept at getting around and finding some less busy areas so it was fine. 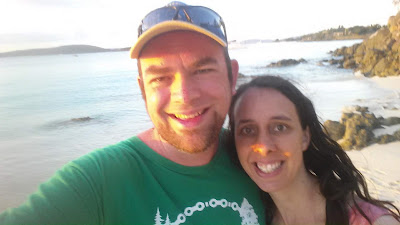 We did enjoy the beach a lot but explored a lot of other places too. I hope to share our whole itinerary soon. It was interesting going and trying to be zero waste - I didn't accomplish the zero part but I did find ways to avoid trash (especially plastic) a lot so I was happy about that. I will have a better report on that later.
We were working to do this trip somewhat on the cheap and it was going fairly well for a bit but a canceled flight threw economical all out the window. Oh well, life happens and temperatures that are way below zero are not the airlines fault. We were trying to leave on the coldest week of the year. We had -41 (and that is not windchill - windschill was around -65) in our town just after we left.

I have so many things that I want to tell about so hopefully I can write some good long posts soon. 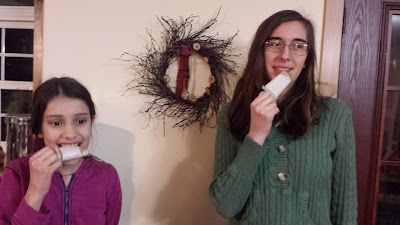 We are still exploring ideas to figure out Mara's health problems. We seem to have made some progress but we are still working on things. Most recently she is going on an elimination diet where we go off Dairy, Gluten, Corn, Soy, Sugar, Peanuts, Eggs, Beef, Pork, Shell Fish and processed grains (and probably some other things that I am forgetting at the moment) for 3 weeks and then we slowly and methodically add them back in again. We started Thursday. Megan and I are joining her. We have been doing tons of cooking experimenting since then including some yummy coconut milk Popsicles that Megan made. I will try to share some more about that as well.