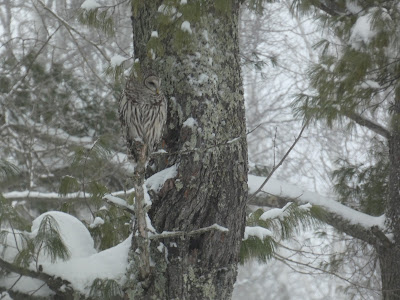 On Saturday morning I happened to glance out the window just as an owl flew up to sit in a tree near our house. I know owls live around here but we don't often see them so that was fun to get to see it. I showed Ken and then pretty soon all the kids were looking out the window at it as well.  I believe it is a Barred Owl. I think it looks so majestic just sitting up in the tree.

Ken had given me a camera for Christmas and this was a fun opportunity to try it out a little more. I really appreciated the large zoom that it has for this photo shoot. The picture above I took through my office window but the one below is from our front porch. 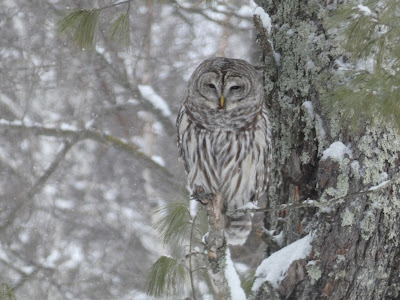 Owls are often considered wise I believe because they just look like they should be. :-) But anyway I thought I would share a verse on wisdom to go along with this post.

"The fear of the Lord is the beginning of wisdom; all those who practice it have a good understanding. His praise endures forever!" Psalm 11:10

Thinking about this verse I would say that an owl probably is wise - They, like all of the natural world, do fear the Lord. God has created them to praise him just by doing their normal day to day activity. But then they don't really have a choice. We do however and the best choice is to Fear and Praise our Lord and Savior. It might not sound like fun to "Fear the Lord" but that is something we are told to do. When it talks about fear of the Lord it is that understanding that God is Almighty, he is powerful and he is just. We need to obey Him. There will be punishment for those who don't. But it doesn't mean we live in a scary world were we always need to be afraid - not at all! God also is full of love and mercy and he gave us Jesus to pay the penalty of our sins when we believe in Him and obey Him. Fear of God will lead us to a place of peace, contentment and true joy! I hope you have found that!
Posted by Abbi at 10:56 PM 2 comments:

This is our most recent music project. Aaron found this song and wanted to do it and I have truly enjoyed getting to play it with him. Jonathan was the mastermind behind the recording (both sound and video) and it was so fun to have all sorts of other family and our friend, Will to help out with the producing of it.
Posted by Abbi at 9:50 PM No comments:

This Last Month - A busy one it has been!

The last 31 days have been very full. It has been super fun and I have loved it. Here is part of what has been going on around here.

-We hosted a Cast Party for "Annie" at our house. Over 40 people came. It was super fun to reconnect with the friends that we have made in Theater. We did a potluck supper - Great Depression style (to go along with "Annie").

-Ken and I celebrated our 21st Anniversary. No big trip this year but we did enjoy an evening out.

-I had a fun lunch with my friend Lyndi whom I hadn't been able to spend as much visiting time with lately as I like. :-)

-We Sang at the Nursing Home.

-Jonathan recorded Aaron and I doing the song "Matterhorn.

-Mara and Thomas arrived on the 19th and stayed until yesterday, the 11th. We loved having them here! Thomas had a long break from the University and that included from his tutoring job as well.

-We went sledding out at my parents with a lot of family (after eating a yummy lunch there).

-We enjoyed supper at Keren and Benjamin's and participated in a White Elephant gift exchange. It was rather fun.

-We celebrated Christmas. The morning was just our family but for lunch we were joined by some family and friends. I think we had a total of 18.


- We dealt with some sickness. I was super thankful not to get it myself but my boys had some times of not feeling good. 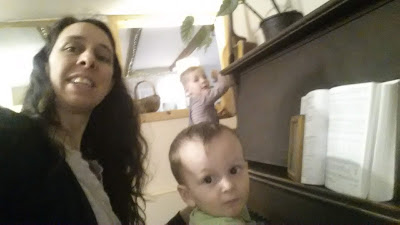 I tried out babysitting again. My family and Keren and Benjamin (Keren is my sister and Benjamin and Thomas (who is my son-in-law) are brothers) wanted to go see the Star Wars movie. I have decided to never watch Star Wars so I wasn't interested so I offered to watch Ephraim and Mathias. I did it at their house (they are neighbors). We started off well (You never know with 1 and 3 year olds) But within 10 minutes we had blood from one end of the house to another. Ephraim wanted to show me the glow-in-the dark stars in his room and so of course we had to turn the lights off and then he wanted to jump on his bed (and I was being a lenient aunt) and then he fell and hit a corner of a wall and cut open the back of his head. He had blood streaming out and ran to the other end of the house looking for his mom. We got it taken care of and had a great time with stories, games and music later but I did wonder if I was very good at babysitting anymore.

-We moved all of my Mother-in-law, Sharyl's stuff out of her 2 storage units and into her house and garage. That was a busy Saturday. It is nice to have it done. We were thankful to have my parents and our kids (including our very helpful son-in-law) help. Though not Aaron's help - that was the day that he was sick. 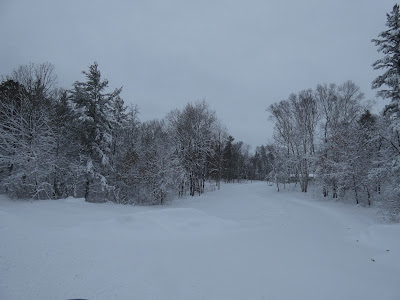 -Overnight we got a lot of snow which continued to fall on Sunday. Church was cancelled but since 3 households from our church (My sister and family, my mother-in-law and us) all live within 1/2 mile of each other we decided to have church together at Keren and Benjamin's house. We figured we would walk but Aaron was still feeling a little gimpy from being sick so Ken thought he could test out his new truck in the snow. It worked quite well. 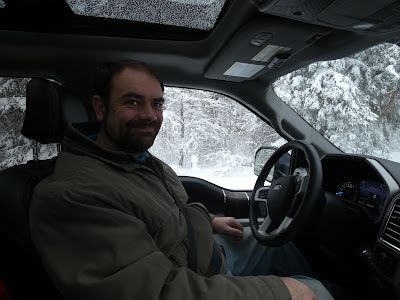 -Then we had those people over to our house for lunch and games. We are so thankful to have family living close that we can hang out with even if there is a snow storm. 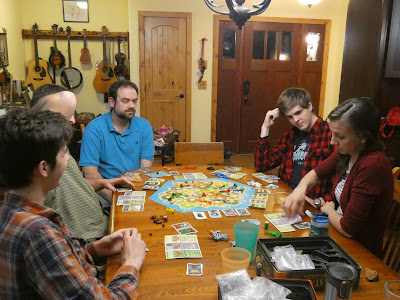 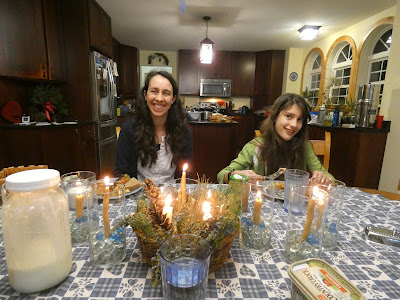 -We had a special supper on the last day of Chanukah. 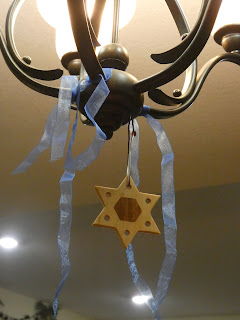 -The morning of New Year's Eve found Mara and I sewing up 3 easy 1920's dresses for the party we were going to that evening. 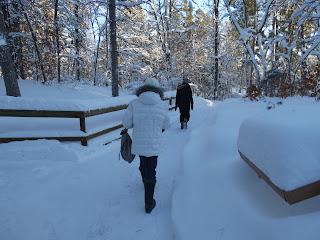 -On New Year's Eve in the afternoon Mara, Thomas, Jonathan, Sharyl and I went to an "Escape Room" that was at the State Park. We had to get a park pass for the vehicle but otherwise it was free. We had fun with that.

- We traveled up to my sister Martha's for New Year's Eve and New Years Day. She and her family live around 2 hours drive North East of us. They suggested that we wear 20's apparel for the evening.

-We had the Rotary exchange student who is due to come live with us for a few months starting in March over for a day. 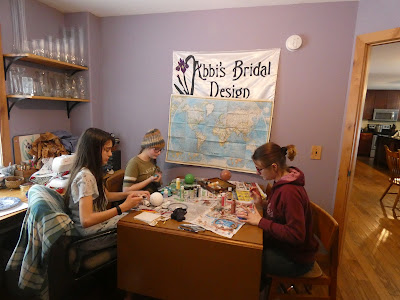 -On the 5th a couple of girls from church came over for the afternoon. They and Megan had fun with a art project (Making globes and planets).

-Also on the 5th we held a party with Soup, Snacks and Games. We had around 50 people here. It was fun. 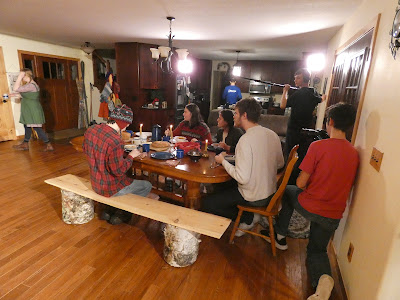 -On the 6th Jonathan had us shoot a video for "Matterhorn" the song we had recorded earlier. We had over all the teenage cousins and Harrison who is 21. Jonathan also had his friend Will come help with the filming. I spent that day with 13 teenagers and college age people. It was fun and I found out that they can eat a lot. :-) They had fun turning part of our house into a "ski chalet". 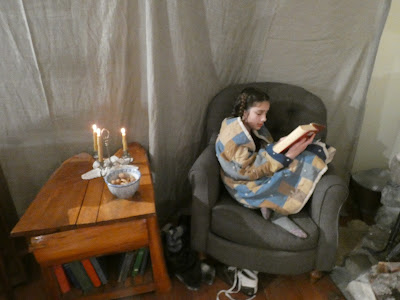 -Both of my sisters that live out of town were in town basically all of last week. So all of us siblings, except my oldest brother who is currently in Oregon, and our families hung out together a lot. We spent a lot of time over at my parents house.
-We went to an art show premier (I don't know if that is the right term or not!) that showed the art of a friend from Theater. It is super neat fabric art.

-We enjoyed a supper at Nana's new house.

-Mara and Thomas left after being here a little over 3 weeks. We were so glad they got to come.

It was a good month. I am excited for this new year - I hope you are too!