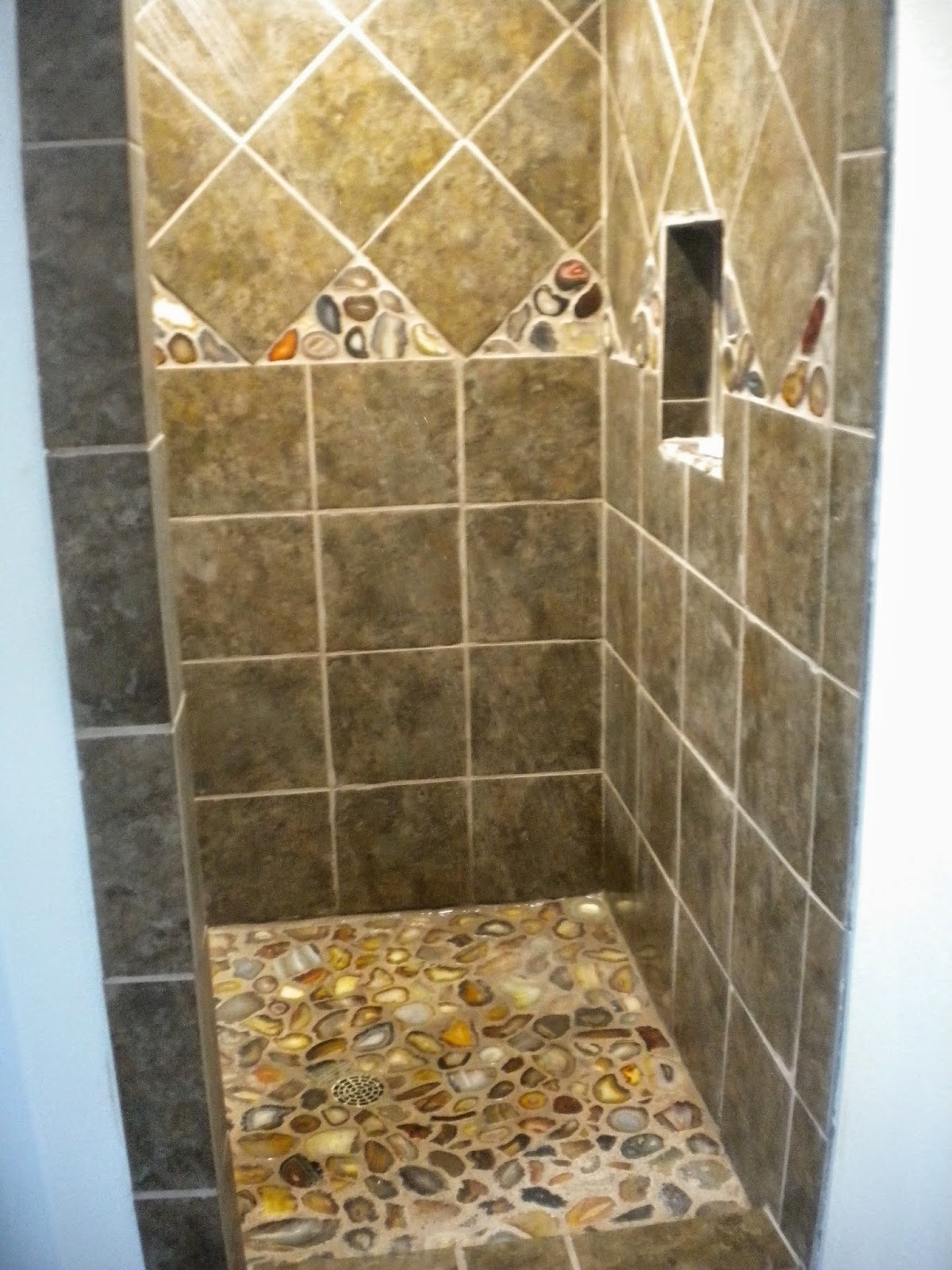 Ken and I like to take showers and it is an extremely rare day when one of us wants to take a bath. So when it came to making our bathroom a shower was what made sense. We had thought we would have a shower inset but Ken wanted it to look nice. After visiting with our plumber however he said that the only option through him was a solid color fiberglass. That was not what Ken had in mind. They work perfectly well and we were quite satisfied with that at our last house but that wasn't what he wanted here.

So Ken says to me - "Do you think you could tile a shower?" I with very little tiling experience wasn't so sure but I went on line and watched a bunch of YouTube videos and hesitantly said "I guess so". Tiling a floor didn't sound to hard as it was flat and didn't need to be waterproof but a shower sounded a little more challenging.

This was a project the I mulled over in my mind a lot before starting. I also watched a lot of YouTube videos. Some of them over and over again. What really concerned me the most was not actually the tiling but making the mortar pan. All in all - it was (I will admit) a kind of lengthy (around a week or so of quite a bit of work) project and there were times I would have loved to be able to give it up (before I ever got to the actual tiling) but it felt very good to get it done and we are quite happy with it and I love that we have a custom shower for less money (I think) than a fiberglass one would have been. The contractor thinks that I probably saved around $3,000 doing it myself.

Here is the process that we took to get this shower done: 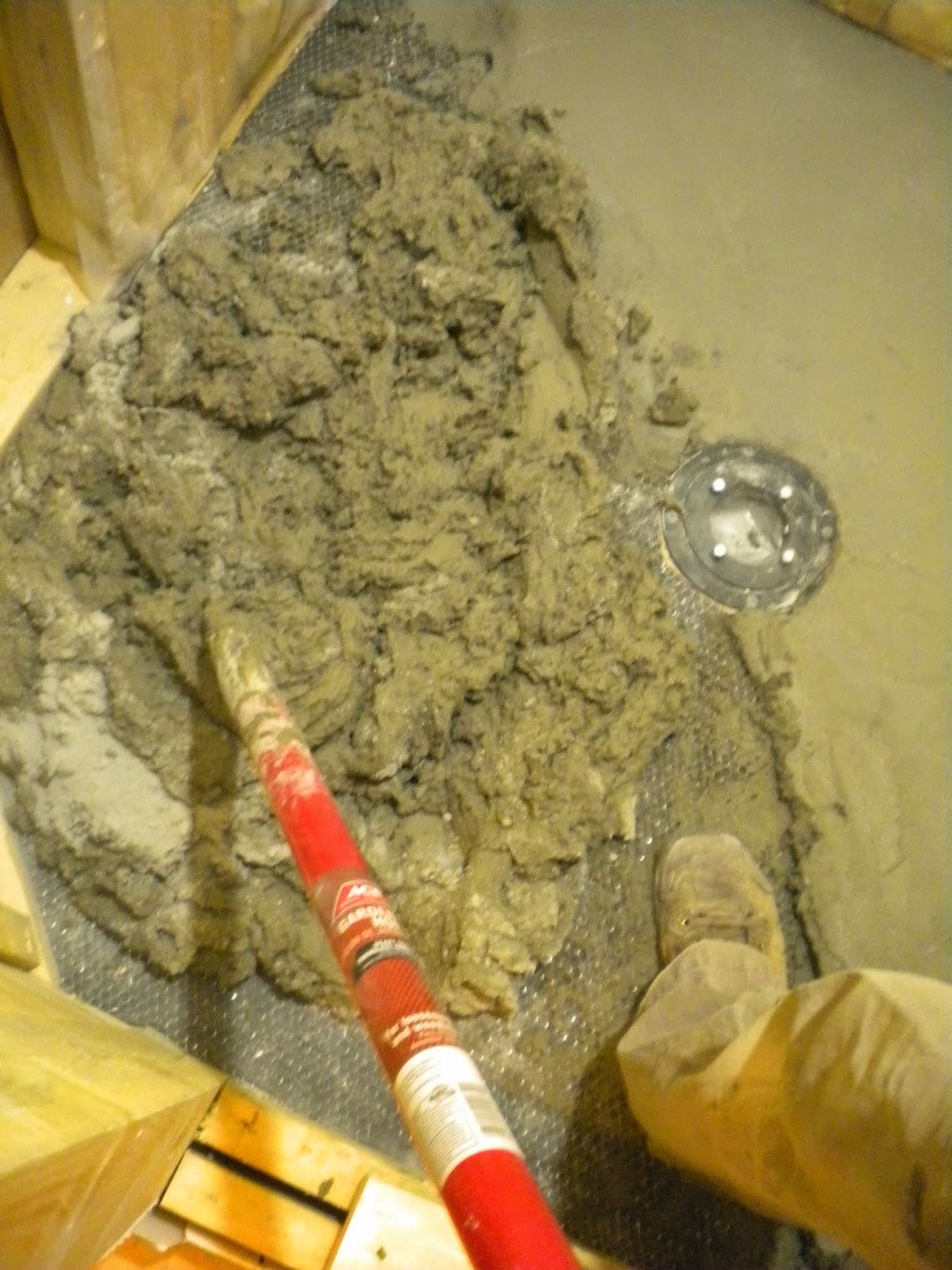 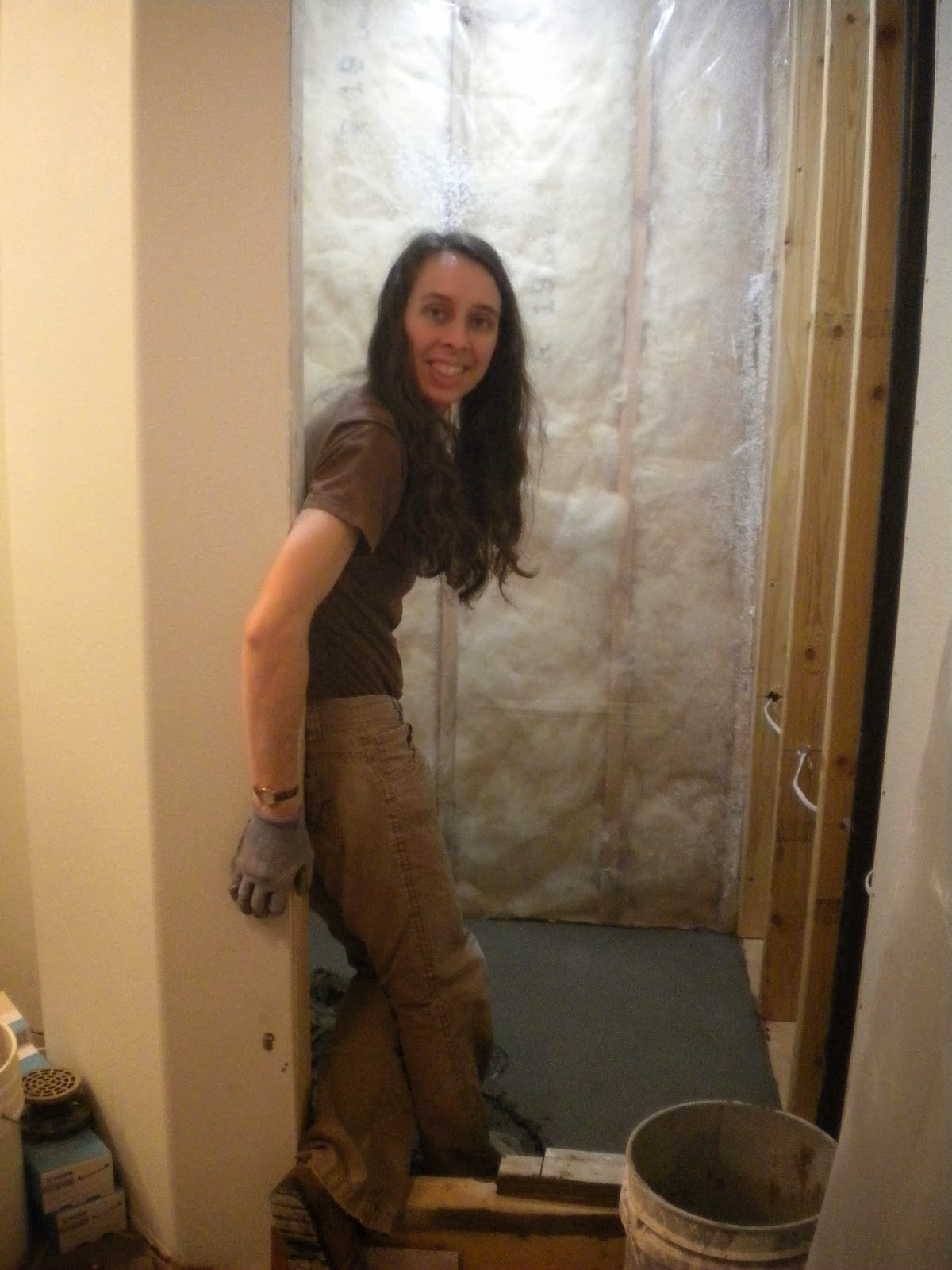 When we decided to tile our shower we figured we would just use some of the same tiles as we used on the floor for the shower. Except I realized we would need something smaller for the floor. I really liked the different pictures I have seen of pebble shower floors. They look so neat and natural and so that was what I wanted. Ken wasn't so sure. He was afraid it would be uncomfortable on the feet and also he wasn't sold on the look. But he said I could go ahead.

So I started checking around to find stones. I didn't need a ton and I didn't want something terribly expensive. I didn't care for the stones "tiles" that were made for a look like that which were at Menards. I figured I could find them cheaper anyway. Ken suggested that maybe one of our local landscaping companies would have some and that sound like a good idea to me. He had heard that they had polished stone and I figured that they quite likely would have just the smooth stones that I wanted too. 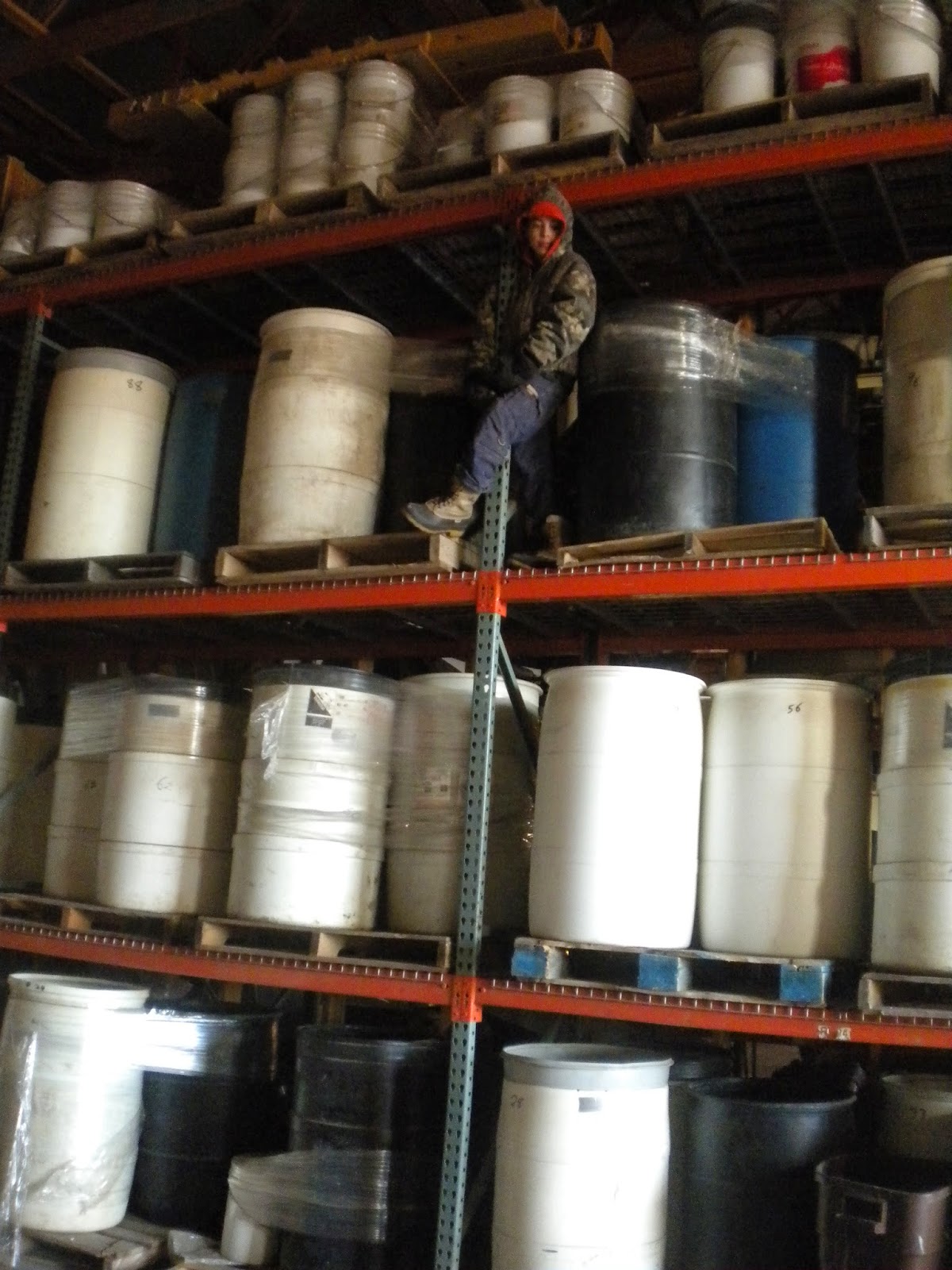 I set up a time to go over and look at their rocks and was a little overwhelmed when I did that. They had barrel after barrel of polished rocks. I had my kids and an extra child with me when I went and they thought it was a blast looking through all the rocks. The owner had said they could climb up and check the upper barrels and they thought that was great fun. 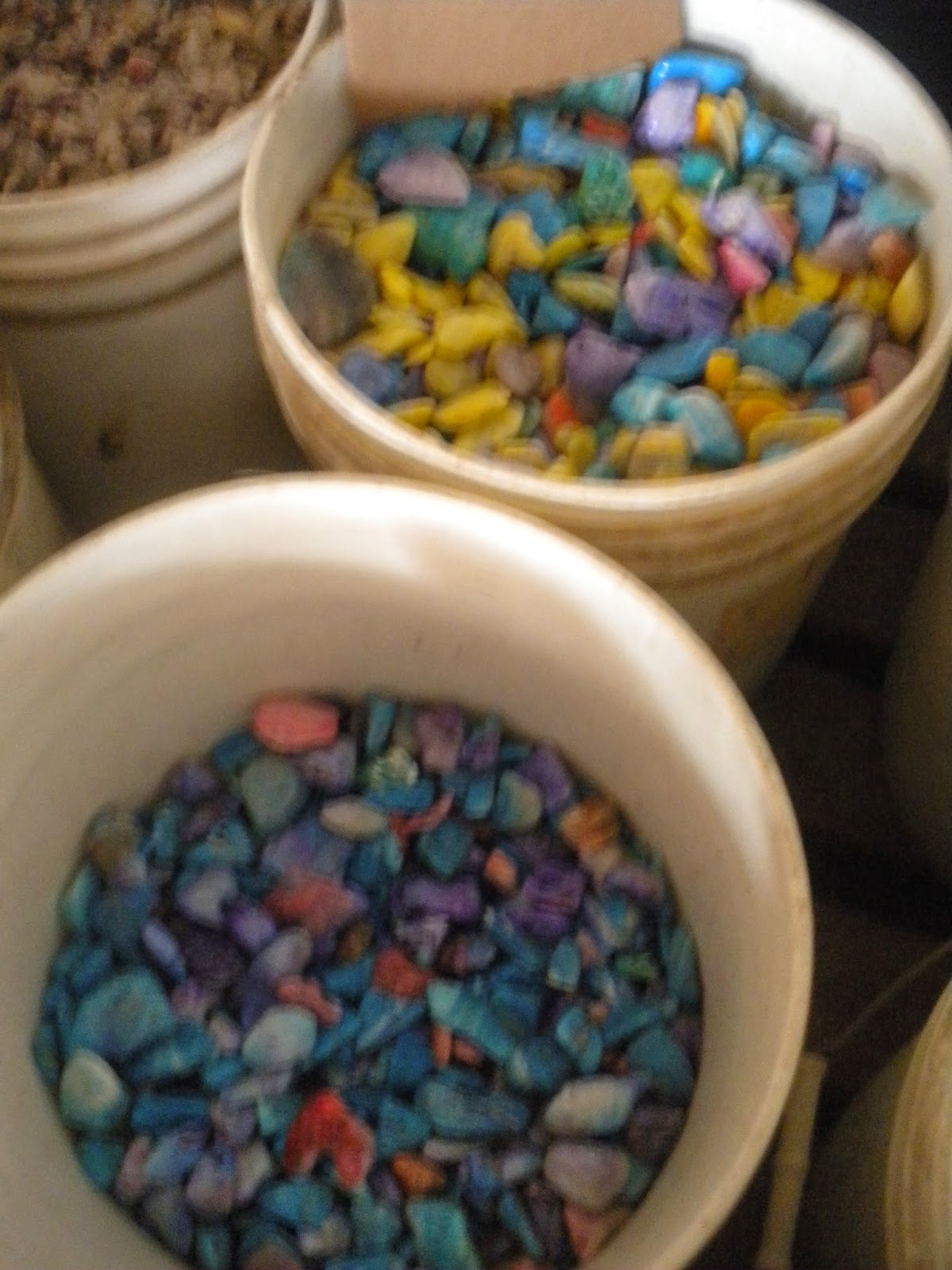 They also just loved seeing all the rocks that were available. These Easter egg (dyed rocks) were a hit in their eyes. Unfortunately what I wanted was quite different from what they loved. And I wasn't finding what I wanted. The rocks were to shiny and to unique. And I was having trouble finding ones that matched my tile. 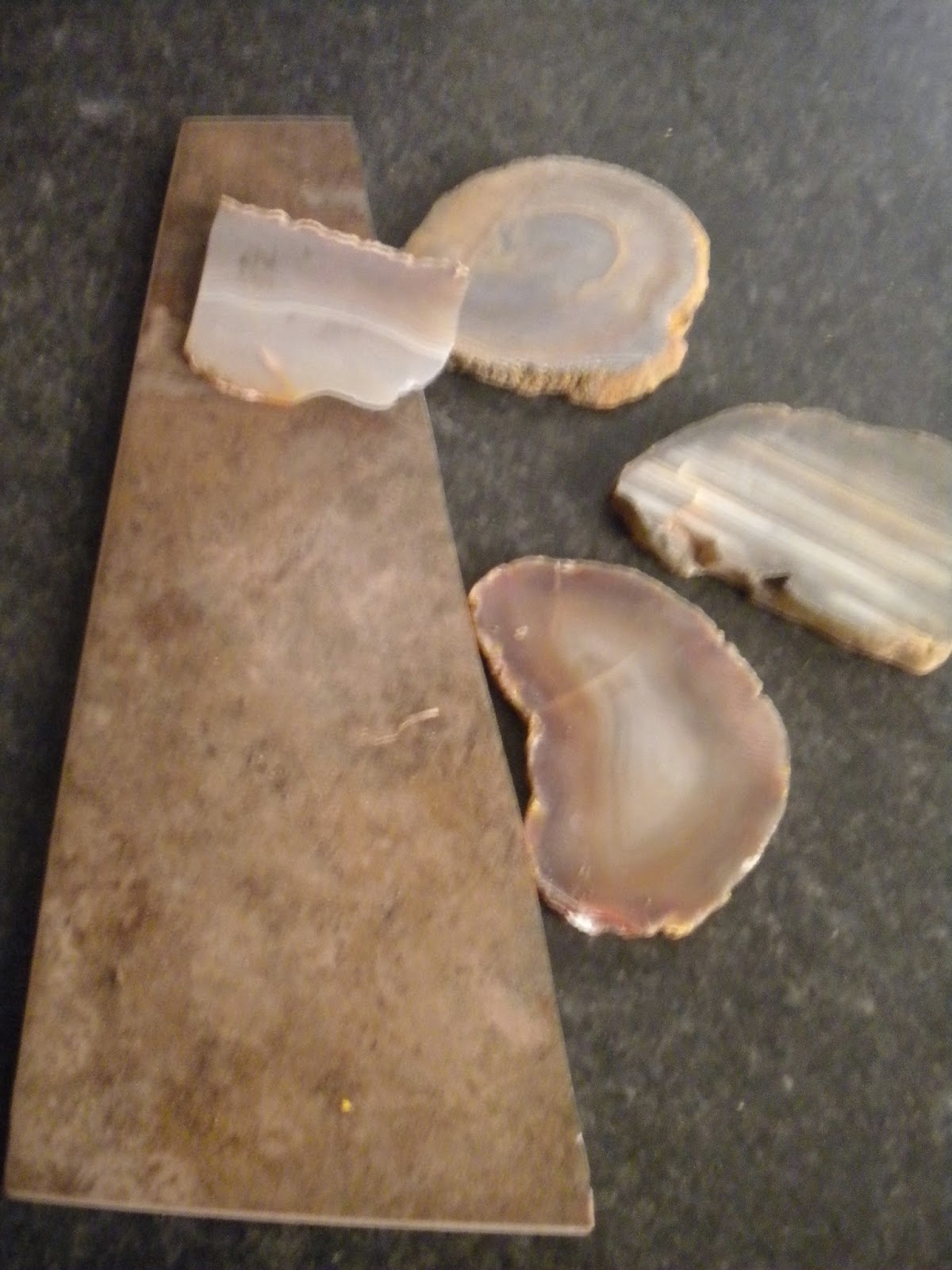 But then we noticed the split agates and started to consider them. They were a great color and they were really pretty cool! They were also a little cheaper than the other rocks. I took a sample home to show Ken and he said to go ahead.

We are pretty happy with them in our shower. They aren't what I was originally thinking but they are neat, unique and comfortable on the feet and were really easy to lay and I like them! 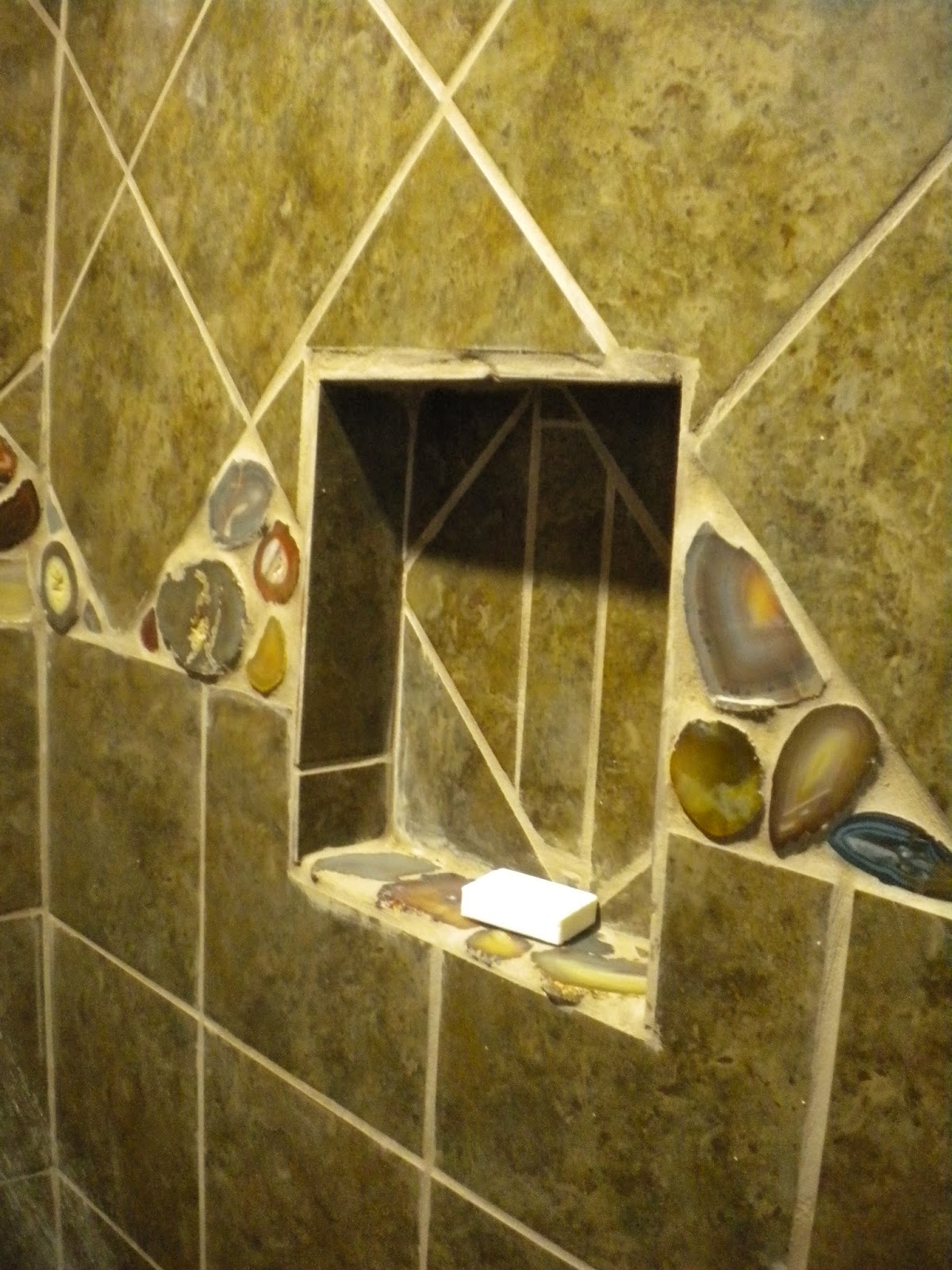 I used them as accents on the walls and then for all of the floor. 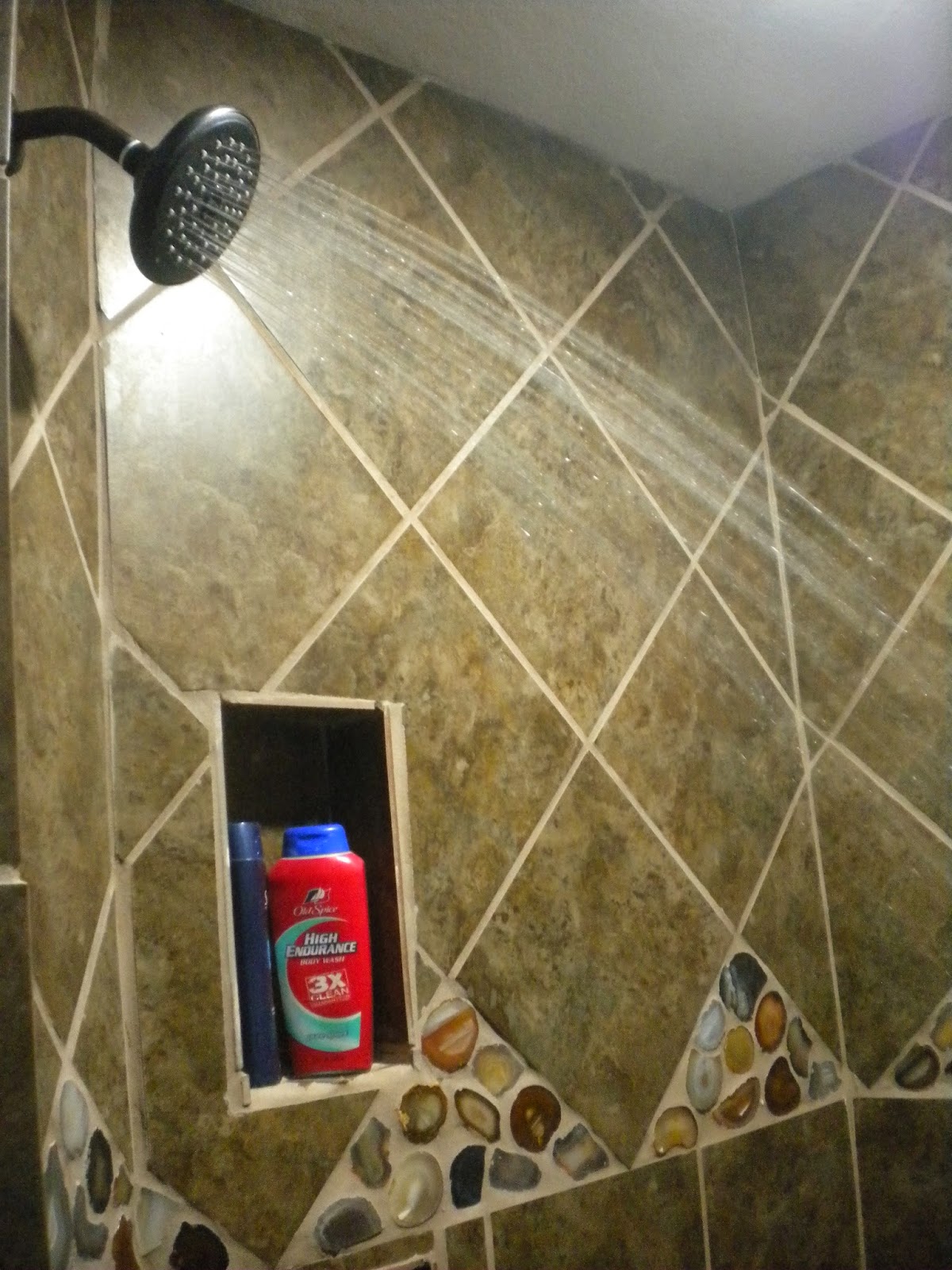 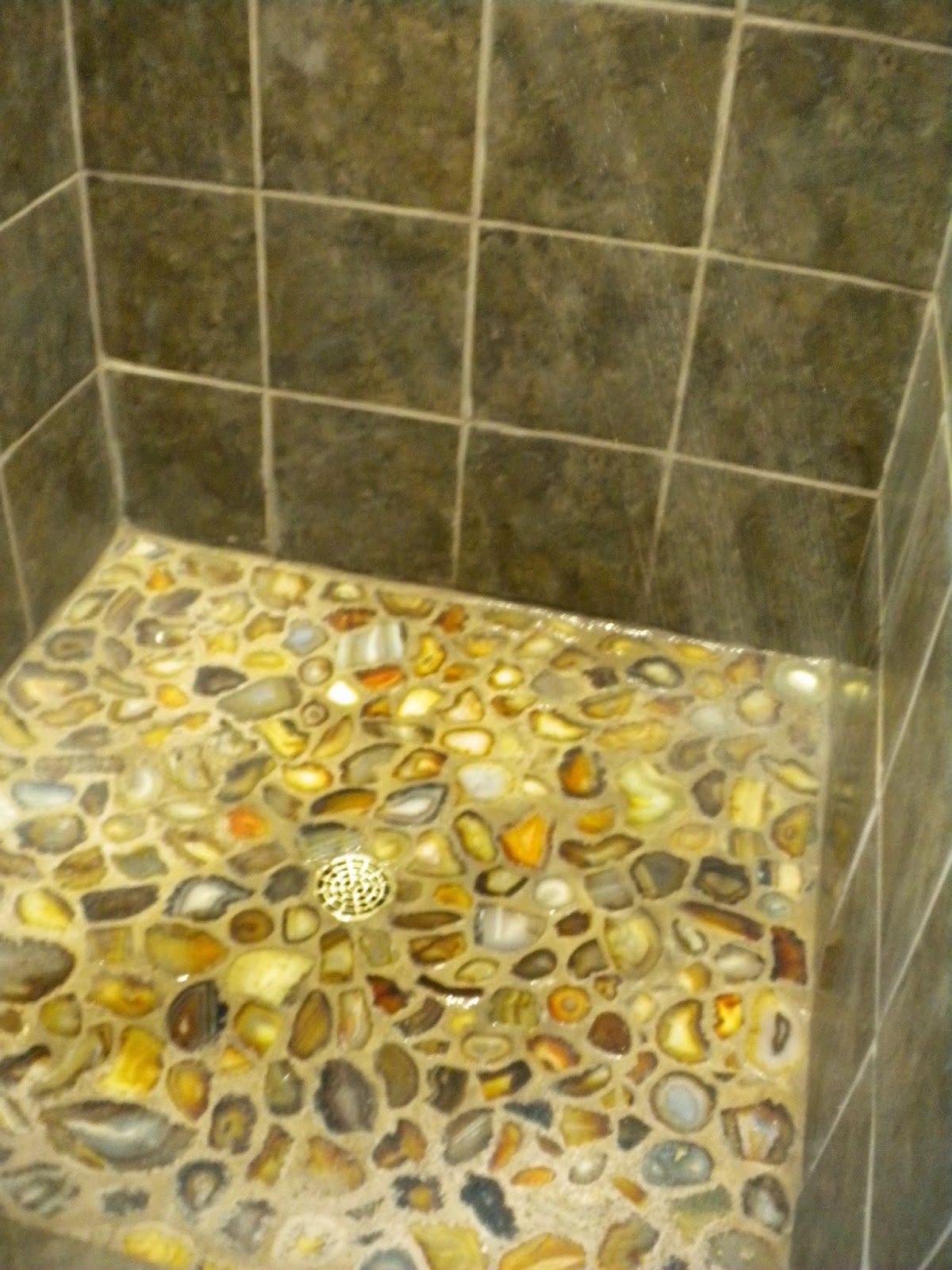 The shower is far from perfect but it is functional and we thinking it is pretty and were are pretty happy with it. 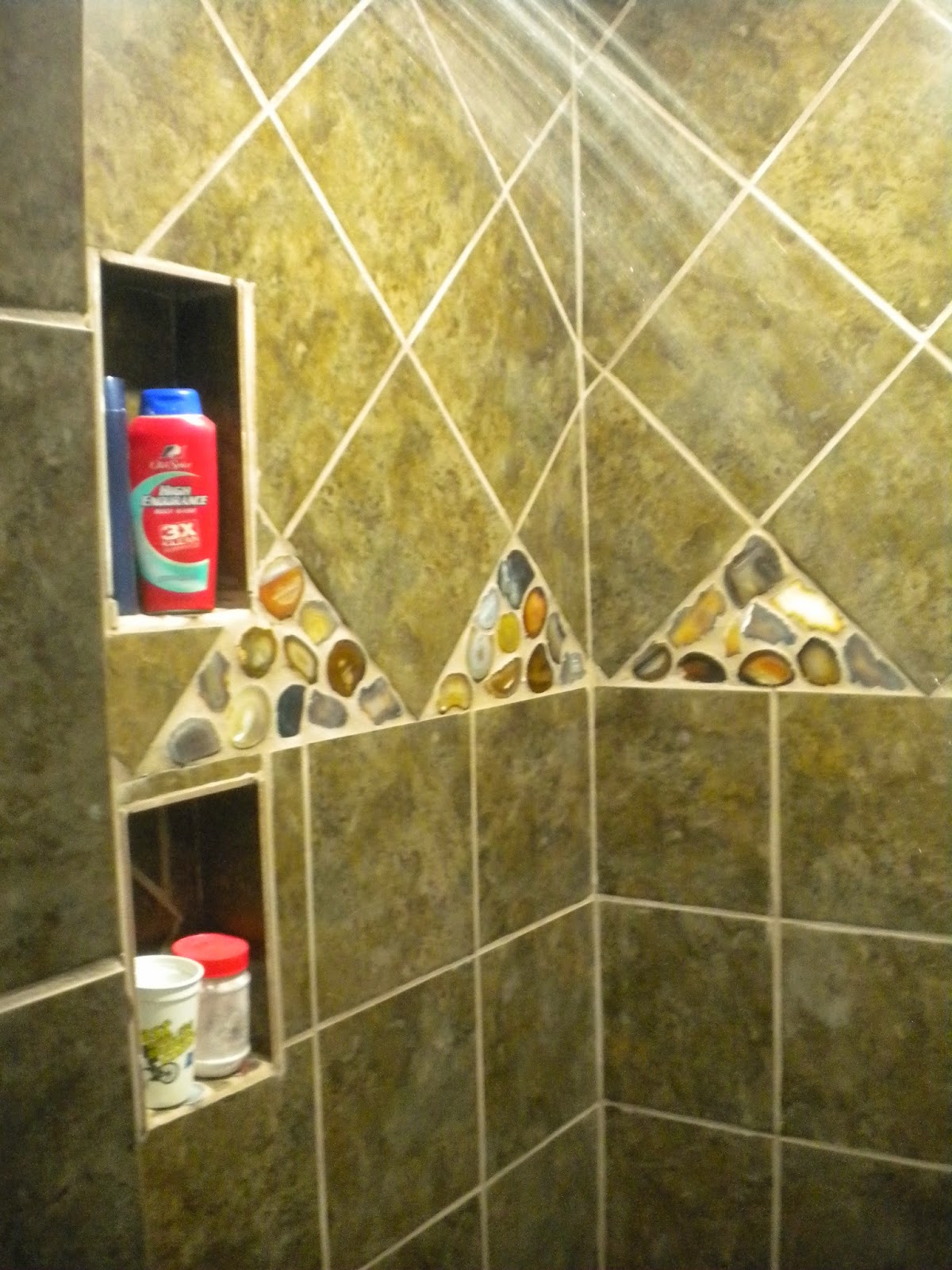 Some of the slices ended up being polished so I tried to put the polished ones on the walls. 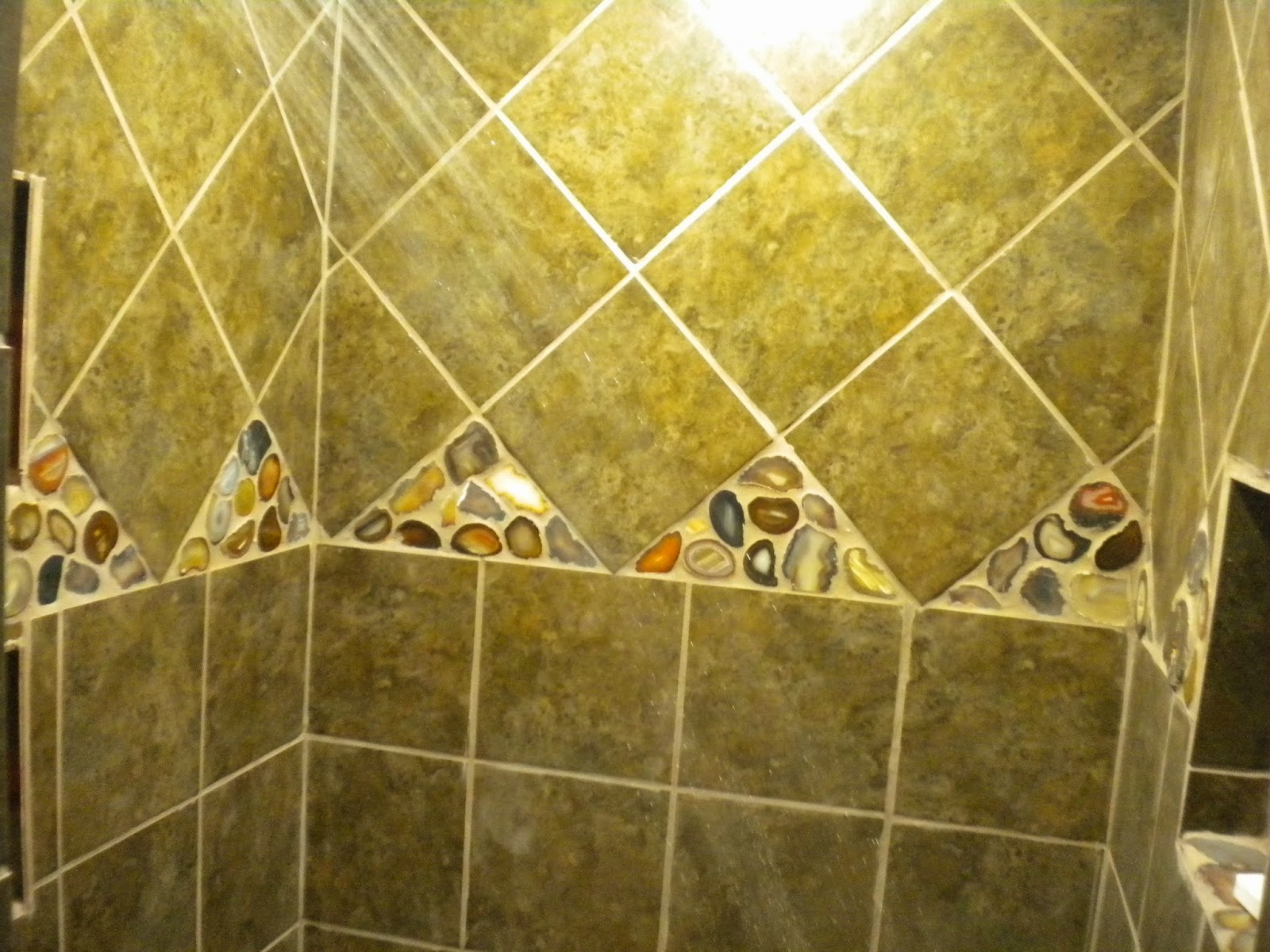 I think diagonal tiling adds a neat look so I want to add that to this shower. 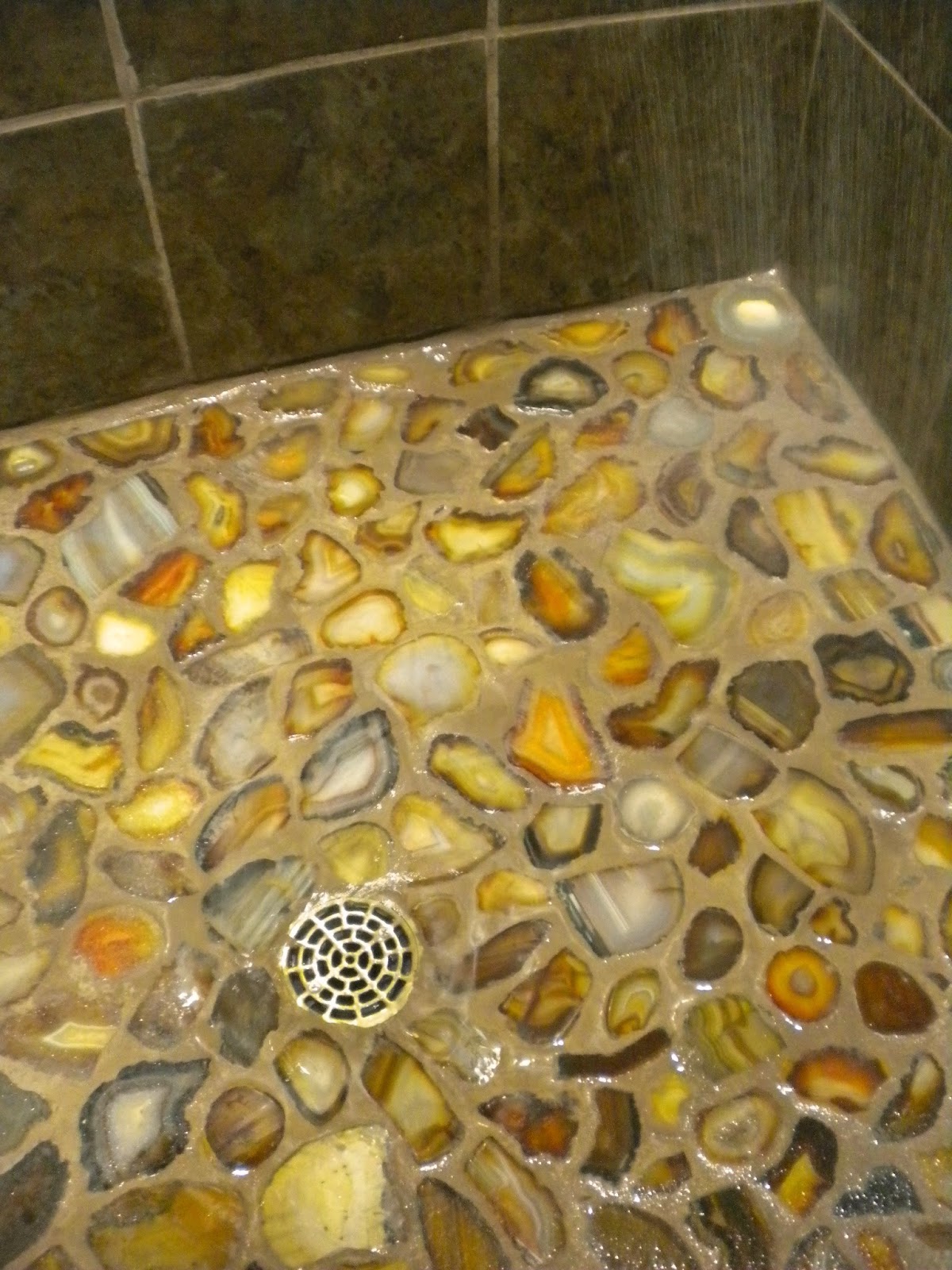 Water makes the rocks look really cool. They really aren't that yellow - that is just from the nighttime lighting. 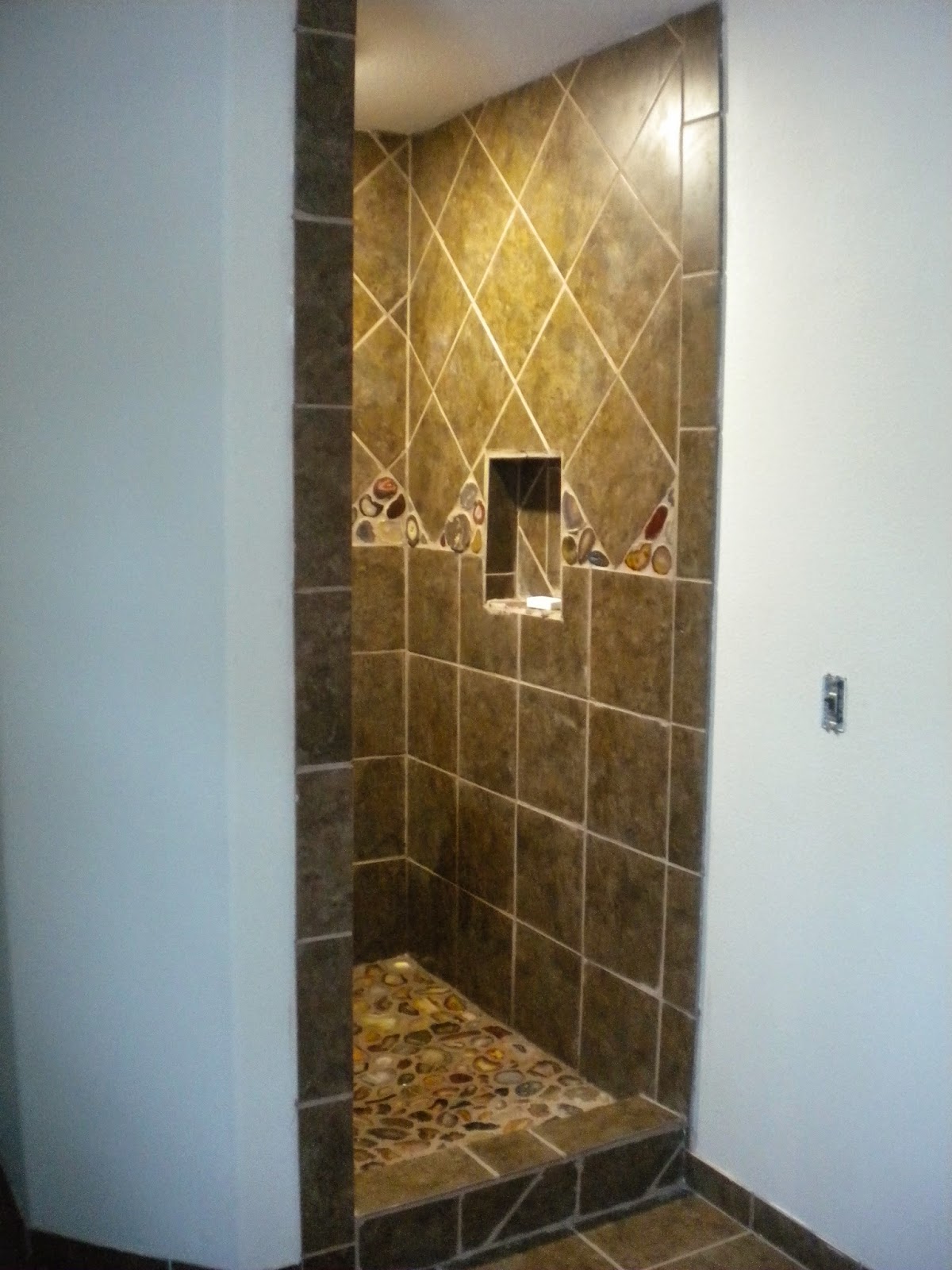 A shower curtain is still up for debate. It works without ones and I like the way it look that way but we are concerned about moisture getting out on the walls and potentially causing mold to grow. We don't want that.

Have you ever attempted a project where you felt overwhelmed at first but after you got going it worked out okay? I would love to hear those stories!

Thanks to God for His grace and patience with me as I work on projects like this.

Email ThisBlogThis!Share to TwitterShare to FacebookShare to Pinterest
Labels: homesteading

This is beautiful!! Much more beautiful than a normal surround!! We have loved your home building process and are so thankful that you shared.

It looks beautiful! You did a great job.

Looks amazing! Want to come do one in our master bedroom? I like the idea of no shower curtain, but don't know what problems that may cause.

Thanks so much everyone!

Lydia, If you lived around here I would be more than happy to help you with your shower. :-)