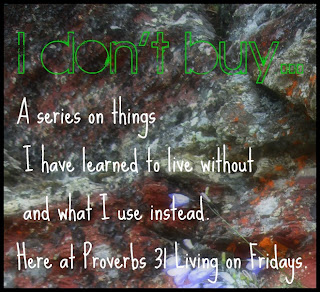 Laundry soap was one of my big breakthroughs with not buying. I have not bought laundry soap for years now. This was one of those things that you figure (at least I did) that you would always buy- you needed it, it was too complicated make (I thought), and what else could you do?

When I discovered that there were other options in this area then I started wondering about other areas as well. I started doing research and I have been able to cut out quite a few things from my shopping list that previously I had thought were essentials. It is rather exciting.


So, if I don't buy laundry soap than what do I do instead?

I make it from 4 simple ingredients. The first place that I saw how to do this was on the blog The Simple Dollar. Since then I have seen this basic method promoted by the Duggars and others.
Here is the recipe:
-One bar of Soap (I have found that you can use a wide variety of soaps though I think fairly strong ones might work best. Try out whatever you can find cheap.)
-1 cup of Washing Soda (Find this in the laundry aisle and don't confuse it with baking soda- though very similar they have an important difference which will make it turn out differently)
-1/2 cup of Borax (I have heard this can be eliminated but I always use it.)
-Water

To make it you put 4 cups of water in a pot on the stove and then shave the bar of soap into it. The soap shaves better in my opinion if you have let it dry out first. I use a little paring knife to do it but you can also use a vegetable peeler. Heat this mixture up until the soap dissolves. Stir it every so often during that process.

As it sits the mixture will gel up. I use about 3/4 cup in each of my extra large laundry loads. When I put it in I do try to kind of squish any of the big gel chunks to help with the dissolving in my laundry as sometimes they haven't completely dissolved and then a few of the clothes might have a bit of residue on them and I have to rewash them. 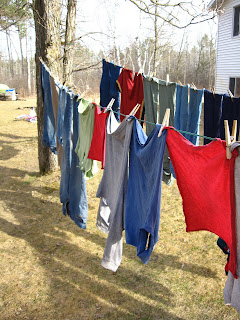 I think this laundry soap is quite satisfactory (I must since I have been using it for several years!). I won't say it works better than store bought but I do think it works as well and it is ever so much cheaper as well as I love the fact that the only trash I have from it are soap wrappers (one every couple of months) and the washing soda and borax boxes (only every year or so) which I can recycle.

Thanks to a friend (who gave me some) I did also recently try Soap Nuts for my laundry. I was quite favorably impressed. I would be glad to use them all of the time if I were able to find them at a comparable price to my homemade laundry soap. I haven't looked for deals on them yet so I am not sure the prices. But I do like the product.
Posted by Abbi at 8:27 AM

Interesting article. Will make a list and check out the soda and borax on "town day" next week. (We try to do all our in-town chores on one day.) The soap though I have on hand. And no packaging to it even. We buy handmade soap from a local soapmaker. It is more expensive than the general commercial soaps, but is also much nicer. She does make some soap with added scent (using essential oils). But for basic soap, if I order a whole batch she gives a discount -- because she cuts it straight, no putting into fancy molds, and then one label for the whole batch so she does not need to label each soap individually. If people have local natural soap makers in their area, checking with the soapmaker about soap types and bulk discount might be useful.

I was a bit skeptical about homemade detergent - not about it's cleaning capabilities but the smell that would be transferred to my clothes. I'll admit that I'm hooked on the "fresh or floral" smells of commercial detergents. A friend of mine suggested I add scented oil to leave my batch. I took her advice and added lavendar with the other ingredients. It worked wonderfully. If you like a scent in your homemade detergent you should try this trick:)
Park City Laundry Care

yes! it is so easy and so much cheaper! I make a dried powder version...but really it's all the same in the end.

I also have been making my own soap since about 2004. I think it works pretty good. I used to use felps naptha soap but even that very mild scent was too much for my son, so now I use Kirk's Castille fragrance free soap. I must admit the felps naptha did get the clothes cleaner, but it still works for most of our clothes. At one point I tried soap nuts, which I loved but compared to the homemade stuff it is much too pricey. I also sometimes sell a bottle or two of my homemade laundry soap (and also give away alot for free.) But for at least 4 years the selling has paid for all the supplies for my soap as well. I am now out of supplies, and need to restock. For about $20 I will get enough washing soda, soap, and borax for about 20 gallons of laundry soap (plus with extra washing soda and borax.) This will last me all year (even with selling a few small bottles and giving some away too.) I love that my clothes have no scent after washing, that to me is clean. Other detergents usually leave a smell (or chemicals.) And I don't see the sense of adding cost by adding essential oils.

Stopping by from Frugal Friday :)

For awhile now I've wanted to try making my own laundry soap. This looks so simple (and cheap!) that I may just have to give it a try.

Thanks for the info!

I make my own laundry soap too, but a powdered version. It works perfectly for us, especially since a couple of us are allergic to scents in regular detergents and soaps.

How interesting! I wish I had this recipe when I was using cloth diapers. that fancy soap for them was sooo expensive.