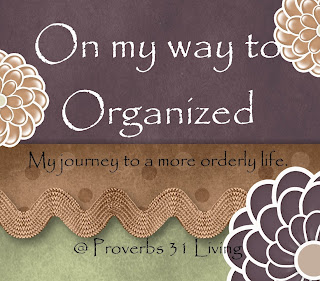 One of the tools we use for being organized at our house is a chore schedule. The kids each have various chores they need to do each day and as several of them (emptying the dishwasher, sweeping, etc.) are rotated chores it is nice to have a list to reference who does what on each day.

I also have a  list for me which is especially helpful for getting me in the routine of things that I want to make into a habit. Some things, like making meals, I just know I need to do so they don't end up on my list and the older kids and I don't have making our bed on our lists either as we simply do that automatically but for the younger kids I have it on their list.

Having a list already made up takes a lot of the need to plan and think out of the day. If a child is wanting to go play I can just make sure that they have done the needed things on their chore list first and then they are free to go.

I have used chore lists (sometimes more faithfully than others) for years now in fact here is a link to a post where I shared all of our lists in 2007. I still use the same list for my monthly, seasonally and yearly chores but the other lists have been revamped - especially for the kids.

This week I have been working on revamping it yet again. This past fall we made a lot of revisions and updated it so that the kids were carrying a little heavier work load - after all they were growing up and are capable of much more than they once were and we want them to be prepared for running their own homes someday. But there were a few minor details that needed to be changed and I added a few things. 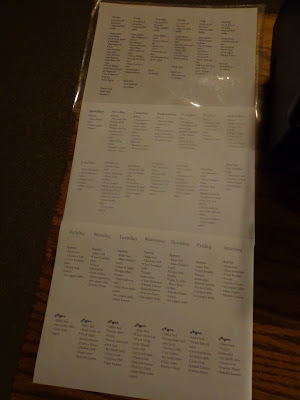 Having the updated chore list this year has been such a blessing. The kids have taken over the cooking of some meals (I get part of the weekend off! I love it!) as well as being more involved with laundry and some of the other cleaning. I haven't felt so caught up on things since I did when Mara (my eldest) was a (easy) baby. Realizing that my children are only going to get more accomplished at helping around the house is so amazing and fun to think about! I am so thankful to God for how abundantly he has blessed us!

The kids don't feel overwhelmed with chores either. We have worked on the charts together and mostly their comments have been things like "I would like to make breakfast one day" or "Lets split up the emptying the dishwasher and the dish drainer" (so one child no longer does both on one day). Now that they are all old enough to read that can check the list for themselves and get their things done and be ready for free time. The boys like to rise early so they will often get things done before breakfast.


This time I added Musical instrument practice on to the chart as we have struggled to be regular at that (which is so embarrassing for me to say since I teach other people's children). I also put Spanish lessons on the chart because even though we have and love the Rosetta Stone Spanish Program we just haven't gotten into the habit of using it regularly. Hopefully this will help us to become fluent speakers of Spanish soon! :-)

With these charts we do also totally realize that they are made for ideal days where we are home most of the time. Those don't always happen however, sometimes we go somewhere for much of the day, sometimes we have company, sometimes we get sick. There are some things on the lists that need to be done every day pretty much no matter what but there are others (like washing the hallway wall, cleaning the fridge or dusting) that simply can be skipped - things might get a little gross but we can live with that.

We have found chore charts to be very helpful in living a more organized life. Do you use chore charts? I would love to hear your methods for staying organized!
Posted by Abbi at 11:03 PM

I started out with a chore chart, but each year we re-vise our chore division. So each September we look at who is doing what, and add extra responsibilities and switch some roles. Once the chart is 'established' and a habit with each child, then we can just do it by routine each day :)
Great post!

Very neat. Thanks for sharing...I'm in the process this weekend creating a new chore list and flow to our days.