Frugal Fri.... Oh no, that is Saturday (Never mind that - Frugal Sunday instead)

So this week has been super busy getting ready for a big event today so I haven't done much blogging but I thought it would still be fun to share a frugal post with you as many of you said that you enjoy them. So here are a few ways we have been frugal this week.....

-I found apples and oranges on sale for 99 cents a pound (which is pretty good around here) and I stocked up.

-  I made a pair of pants for my nephew's baby shower very quickly using this pattern (though I did modify it a little) I was able to whip them up in about 10 minutes this morning. 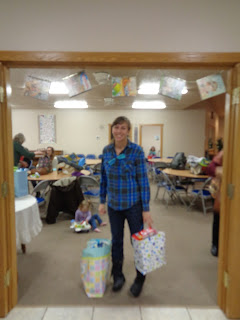 -At the mentioned baby shower  I had fun decorating using children's books that were already at the Church building. I didn't take any good pictures but I made "bunting" to hang above the door and then on each table I combined books with toys or other objects that went with the books to make a fun centerpiece. No books were harmed in the process but it was kind of fun and very easy and free. 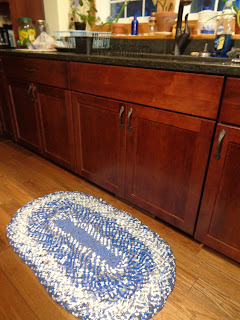 -I finished a rag rug that Megan and I had been working on for our kitchen. I love the way it looks and adds some more blue and white to our room. It was all made from old dress shirts and so it was free. 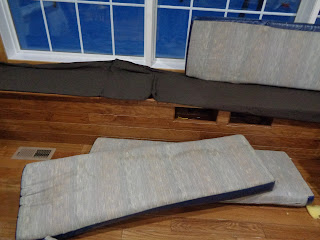 -I fixed up window seat cushions for our living room as well as new throw pillows for there as well. Everything was made using what we already had. All the pillows and cushions had been given to us and the fabric had been given to us as well. I have one more set of pillows to make (the 3rd set) and then I hope to show you the finished product. 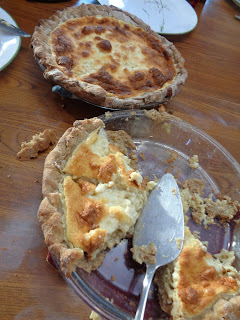 -I tried making a new recipe for breakfast one morning. It was brown rice pie which also used quite a few eggs. It was economical and turned out fairly good. Not a prize winner but filling and fine. 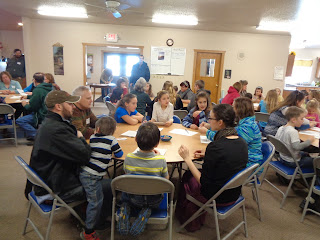 -The reason I have been pretty missing in action this past week is because I was super busy getting ready for an event that I decided would be good to do to help teach people (and we specifically targeted homeschool families but invited others as well) about how the government works and the election process particularly. I wanted to encourage people to go to caucus and to get involved a little to help get our country back on track. The event went well and we had around 80 in attendance even though it was on a Saturday morning where the temperatures were around minus 20 degrees.  I will tell more about it later probably but for now I will share how we hosted it without spending a lot of money. I think I only spent around $5 on it (that takes care of some stickers I bought for a dollar and ingredients to make hot chocolate mix. 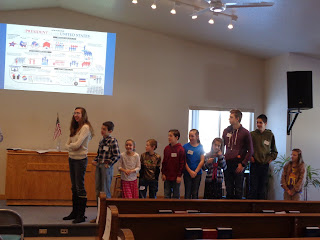 Here are ways we saved money on the event:


So this event did take a lot of time. But happily it didn't take much money.

-For a gift for Valentine's day for Ken I was able to find a book for $1 at the Dollar Tree (I love glancing over their books when I go in there as sometimes you will find a good one) This one is Marco Rubio's Book and it was a New York Times Bestseller and it has a $16 price on the back but at Dollar Tree it is a dollar. Ken is working on Marco Rubio's campaign in MN so I thought he would enjoy the book. Chocolates is another part of his gift. These I won as a prize at the baby shower- they are his favorite brand of truffles. I think this sounds possibly a little cheap but it is stuff I feel confident about him liking and I love figuring out a good deal and I don't think it is the money that makes the present.

-I have saved a lot of money on not buying Kleenex this week since I use handkerchiefs instead. We have been dealing with colds and so we would have gone through a lot of Kleenex.

So that is a few ways we have saved money this past week. How about you?

We also gave Dollar Tree books as Valentine's yesterday! The often have a wonderful selection there.

I enjoyed reading how you put on a large event frugally. Thank you for sharing!

I can't think of anything specific done this week to save money other than using two coupons. We printed one online to use at a local bulk food store and we used another one for a can of paint that we bought which had come on a different can of paint bought previously. Sometimes its hard to remember later to use coupons and I don't often get many here that we can use, but we remembered this time to use these and one was for $7 and one for $3 so that is worth it for $10 savings.

I've always been curious about handkerchiefs. I've had a cold for a few weeks and its been really a bad one for using kleenex. At one point I was using a box a day. But at the same time, I am not sure I would have wanted to use handkerchiefs since I'm not sure how that works with a really "full" handkerchief? (Sorry if that's gross). I can see how it works with just wiping a nose but if you are blowing it a lot do you still use them? Does it all wash out? How often do you wash them? Maybe its just getting my mind around it...I used cloth diapers but I rinsed them first. I use "Mama cloth". But somehow this just seems like I'm not sure how it would work.

We use hankies too !

You really scraped pennies together, and made them shine this week, wow! This is so wonderful that you put together this event with such success and not much out of pocket! What a blessing this event must have been to these people! And all the other wonderful savings you did through the week - your cushions are wonderful, and I love your rag rug too! You have frugality down to a fine science I do believe! :)

Thanks to all of you for your kind comments! I love hearing from you and hearing how you are saving money too!

Nola - to answer your question specifically on hankies- We made hankies that aren't super large (like the size of a Kleenex rather than the kerchief that could double as a dresser scarf) and they are mostly all made from flannel or some other very absorbent material. But still if I have a cold I don't use just one all day long. I use a lot. If I have really "filled it" as you say then I don't want to keep using it. They don't take up hardly any room in the wash and they are super easy to fold so I don't feel like it adds a lot to my load of laundry. I have found that our comes clean very well. I do prefer to wash them in hot with my other "whites". If one gets left in somebody's pocket I would obviously send that one back through the wash again. Anyway - they work well for us and my kids totally prefer them. They are much softer on the nose.

I'm amazed at how the necessary ingredients came together for your election info event. So often, if we ask, someone else has just the gift/talent that they would love to share to help another. This reminds me of a fund raiser that I vaguely recall you hosting at your church. I think the premise was that people offered their particular service and others bid/bought it for a price to be donated to the cause. Can you point me to that post?
Once again, I love gleaning ideas from your frugal posts!

Angie, You are so right that when people are willing to work together (or ask for help) so often someone else will have just what we need to make everything work out. That is the very cool thing about having a good relationship with your church, family, neighborhood or just a circle of friends - it is a blessing to be able to help one another and be helped as well. Often what one person has extra or can do easily is just what another person needs.

I am not sure about the post you mentioned. I have talked quite a bit about making things for Republican fundraisers and you can see some of those posts here: http://proverbs31living.blogspot.com/search?q=fundraiser&updated-max=2011-09-23T23:56:00-05:00&max-results=20&start=10&by-date=false But we don't have church fundraisers as our church financial needs are taken care of with just tithes and offerings. We have done garage sales at times (a bunch from church working together) and then donated the money to missionaries that we support. I may have mentioned how my sister's church down in the Cities raises money for their Bible camp. They do have an auction/silent auction where members donate both items and services and then others can bid on them. I have heard it is quite successful. Some friends also did something like that recently on Facebook to raise money for an overseas adoption. I don't remember if I talked about that or not. We were able to help with donated some hand made items. It was pretty neat because the whole auction that they held raised around $ 8,000 if I remember right.